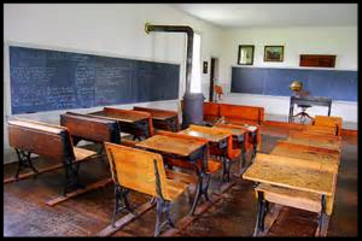 Inside the one-room schoolhouse

An old book discovered on a flea market table may explain why one-room schools worked so well a century ago.

Schoolmaster of Yesterday was published in 1940 and chronicles the lives and times of three generations of school teachers.  The author, Millard Fillmore Kennedy, begins with 1820 when his grandfather Thomas first taught simple lessons to pioneer children in a one-room log building in Kentucky.

From there the family moved to Putnam County, Indiana.  Millard's father, Ben, had taken up teaching by then.  In 1856, the Kennedys came to Johnson County.  Eventually Millard also took up the hickory stick and the Kennedys became well-known schoolmasters of the area.  They settled in Hensley Township near what was known as School No. 3, a few miles west of Trafalgar.

In 1871, the county created the position of "school examiner."  Ben Kennedy was given the job.  The title was later changed to "county superintendent" and, according to his instructions, Ben was to examine candidates for teaching positions and visit every school in the county at frequent intervals "for the purpose of increasing their usefulness and elevating, as far as practicable, the poorer schools to the standard of the best."

At this time there were 80 rural and township schools in Johnson County.  These were primarily one and two-room buildings located about two miles apart.  This allowed no child to have to walk more than one mile to school each way.

Kennedy rode the circuit on horseback.  The job required him to be gone from home many nights, and he was usually "put up" by whatever family farm was near.  He rode an ebony mare named Blackie, and it was said that no other horse in the county had ever slept in so many different barns.

The average elementary pupil of those days ranged in age from 5 to 25 and many of the boys were bigger and older than the schoolmaster or marm.  Some teachers took care of their own discipline (usually with a switch), but others would take note of the offense and say, "Just wait until the superintendent comes around!"

Kennedy wore a big gray overcoat and heavy boots, and many a young miscreant must have cringed when he came riding up on his black horse.  But the delayed punishment sometimes had a happy outcome.  The teacher's anger had usually evaporated and often the culprit had changed his ways in the interim.  As Millard put it, "Many a young rascal thus wore down and cajoled a good-natured young teacher into a pardon for an offense which seemed heinous at the time of commission."  Sometimes, though, the superintendent personally applied the "licks" the youngster had earned.

Despite the firm discipline, the kids enjoyed Ben's periodic stops and the lively stories that he told.  He was an impressive visitor "with his breeches tucked into his high boots, perhaps splashed with mud to his eyebrows, sitting on the rostrum, addressing the pupils, discussing business with the teacher."  At recess or lunch time, the children would swarm around Blackie, petting her and feeding her bits of bread, cake, or apple.

"Uncle Ben" Kennedy, as he became known, loved to visit the boys and girls.  He was eager for their questions and liked to make them laugh.  He praised their progress and encouraged them to seek higher success.  At the end of his visit, the children waved goodbye as he climbed into the saddle and urged Blackie on to the next little schoolhouse.