On Indiana Highway 67 a few miles south of Spencer, a small community greets visitors with a sign which reads:  “Welcome to Freedom - Birthplace of Babe Pierce - Tarzan.”

The town is so small it takes only seconds to pass through, but travelers surely scratch their heads as they continue down the road.  Who was Babe Pierce?  And what does Tarzan have to do with this tranquil hamlet in the hills of southern Indiana?

There’s quite a story behind that signpost.  Perhaps it’s time to tell the story.

James H. “Babe” Pierce was, indeed, Tarzan, and he was born in Freedom, Indiana, in 1900.  Of course, he wasn’t Tarzan when he was born.  He was a strapping young man whose family moved north to Shelbyville after a few years.  He attended Indiana University and became a football star.

After college, he went west to seek a career in the fledgling movie industry.  At a party, he was introduced to a girl named Joan, who turned out to be the daughter of Edgar

Rice Burroughs, the author of  Tarzan of the Apes.  Mr. Burroughs insisted that “Big Jim” be cast in the leading role of the upcoming motion picture adaptation of his book.

Pierce followed the advice of his future father-in-law, giving up a part he had landed in a picture called Wings.  He was replaced in that role by a lanky young actor named Gary Cooper. Meanwhile, history will show that James H. Pierce, sometimes called "Babe," swung from the trees in the last silent movie version of the Jungle hero.   It was “Tarzan and the Golden Lion,” released in 1927.

Soon after the movie’s premier, Joan Burroughs and Babe Pierce were married.  Pierce never played Tarzan on the screen again.   However, he appeared in movies throughout the 1930s and 40s, including the “Flash Gordon” Saturday afternoon serials.

In addition, he and wife Joan starred as the voices of Tarzan and Jane on a network radio show.  They did over 300 radio shows together as the famous forest couple .  They evidently had a happy life together.  You will find them buried side by side in the Forest Hills Cemetery in Shelbyville.  His tombstone says “Tarzan” and hers reads “Jane.”

It is interesting to note that Indiana has been fertile ground for up-and-coming Tarzans.  The very first actor to play the role in movies was Elmo Lincoln, from Rochester, Indiana.  He was Tarzan in three films, all silent, starting with Tarzan of the Apes in 1918.  He had already gained movie credits working for D. W. Griffith in movies like Birth of a Nation.

Many years later, another Hoosier, Denny Miller, from Bloomington, would swing through the trees in Technicolor in Tarzan, the Ape Man (1959.)

All of this came to light after a leisurely drive through a little Indiana town called "Freedom" and, when you stop and think about it, that's what Tarzan was all about. 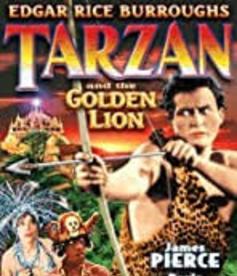 Tarzan of the Jungle 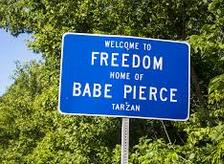